“We can’t win the Le Mans 24-hour race because we don’t have the fastest car on the track.”

“We can’t recruit any more firefighters because we don’t have enough budget available.”

“We can’t sell our brand to younger consumers because it is perceived as old-fashioned.”

‘Can’t because’ is the death knell of creative thinking. It sucks all the oxygen out of the room. It saps energy and replaces optimism and hope with pessimism and light despair. This atmosphere of doom and gloom is only worsened when this negative turn of phrase is accompanied by equally negative body language.

In their excellent book, A Beautiful Constraint, Adam Morgan and Mark Barden champion the philosophy of ‘can-if’ rather than ‘can’t because’ thinking. The source of their inspiration was Colin Kelly, the Director of Research and Development at Warburton’s, a Bolton-based British bakery. When Kelly was leading a team in Russia back in 2006, he found that solutions were often blocked because the ‘can’t because’ mindset that prevailed within a fairly conservative culture would bring conversations to a grinding halt. “We can’t use that kind of packaging because it will slow the line down”. Period. Kelly felt that the ‘can’t because’ response was an instinctive human reaction to what seemed to be an insurmountable challenge. People were only too keen to put their hands up to problems they could solve easily but were not always so eager to go down paths of most resistance. “We can use that kind of packaging if we run it on someone else’s line” was a much more positive statement, full of potential, that kept momentum going.

Morgan and Barden identify a number of advantages of ‘can-if’ thinking in their book.

Listen to anyone with an original idea, no matter how absurd it may sound at first.
If you put fences around people, you get sheep

“We can win the Le Mans 24-hour race, if we use our superior diesel technology and take less pit stops as a result (Audi).”

“We can recruit more firefighters if we use prisoners (willing and able) and pay them $2 per day (State of California).”

“We can sell our brand to younger consumers if we mix together apple cider with Old No.7 Tennessee whiskey to create Jack Daniel’s Tennessee Cider.” (Jack Daniels)

At the end of the day, creative thinking is a human behaviour. Even if you feel deep down that a problem is difficult to overcome, then by using the can-if approach, you have a much better chance of changing your mindset. By simply using this positive construct, you might start to think and feel quite differently about challenges, and then who knows what could be possible. 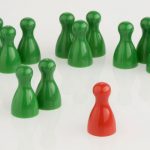 Creativity for the Logical OnesNews