Creative inspiration from the world of gastronomy

In Victorian times, turtle soup was apparently all the rage. It was prepared from turtle meat imported from the Orient, it was very expensive and it was only the seriously wealthy who could afford it. Those people with less money to spend on the luxuries had to make do with a version prepared with various parts of a calf, including the head, hooves and tail, to replicate, more economically, the diverse flavours of the turtle meat. This dish, appropriately enough, became known as Mock Turtle Soup.

In Alice’s Adventures in Wonderland, Lewis Carroll, creates a beast that he calls the Mock Turtle:

Then the Queen left off, quite out of breath, and said to Alice, “Have you seen the Mock Turtle yet?”

“It’s the thing Mock Turtle Soup is made from,” said the Queen.

Almost 150 years later, Heston Blumenthal adds yet another bizarre twist when he serves Mock Turtle Soup in his 3 Michelin star award-winning restaurant, The Fat Duck. He gets inspiration from the Mad Hatter’s tea party, when the March Hare dips the Hatter’s pocket watch into his tea!

How does he pull all the strands together?

A very formal presentation of the entrée begins when the waiter puts down a cup with a tea bag shaped as a gold pocket watch in the bottom. Hot water is then poured into the cup and the ‘gold watch’ (beef and mushroom stocks reduced into a syrup, leaf gelatine and 10-year Madeira) dissolves into a mouth-wateringly delicious consommé with small flecks of the gold leaf floating about. Once the ‘tea’ has been made, the waiter pours it over a mock turtle egg (a puree of turnip and swede with little enoki mushrooms) and sprinkled about the plate are small cubes of pickled cucumber, truffles and turnip brunoise.

Time now to enjoy the Mad Hatter’s tea party at the Fat Duck in Bray!! 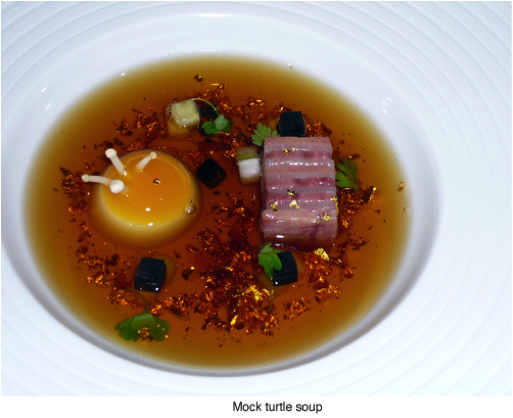 What’s the point? There are three:

For more information about how to cook creatively please do not contact:  mark@wearecreativecreatures.com 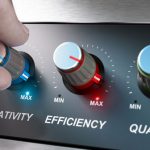 Creative inspiration from the world of musicNews 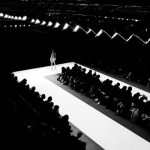 Creative inspiration from the world of fashionNews